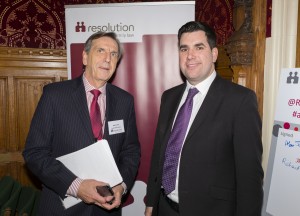 The call to action was the focus of a Lobby Day campaign, organised by Resolution – a national family law group which promotes non-confrontational solutions in family law of which Peter is a former chair. It took place at the House of Commons and was part of Good Divorce Week.

Peter and fellow family justice professionals urged MPs from across the country to introduce no fault divorce law and improved rights for cohabiting couples.

After meeting with Peter, Richard Burgon addressed Resolution members on the call for no fault divorce which is supported by Sir James Munby, the most senior family judge in the country; The Right Honorable Baroness Hale of Richmond, the deputy president of the Supreme Court; the Family Mediation Task Force, and Relate.

Said Peter: “Under current divorce law, unless couples have been living apart for two years, one of them needs to apportion some form of blame – adultery or unreasonable behaviour – which can create conflict and makes reaching a mutually acceptable agreement much more difficult. We’re particularly concerned about the impact that conflict and confrontation between separating parents has on their children whose interests should always be put first.

“Lobby Day was a milestone in our campaign to urge the government to allow for no fault divorce and the general atmosphere was one of MPs acknowledging that change was overdue and being optimistic about it being implemented.”

Peter has made appointments to lobby more MPs including Shadow Justice Minister, Christina Rees, who he met at the Lobby Day event.

Resolution is also calling for the law to be changed to protect cohabiting couples who now make up ten per cent of the population and do not have the same automatic rights as married couples. It is seeking a legal framework of rights and responsibilities to ensure fair outcomes should they separate or one of them die.

Jones Myers highly experienced team of family lawyers can assist with the issues highlighted in the campaign along with all matters related to divorce and separation. You can contact the team on 0113 246 0055 or tweet us on @helpwithdivorce.