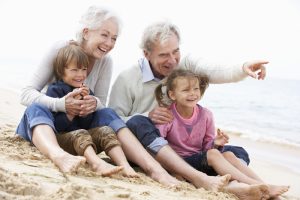 By Jane Bolton, solicitor in the Children Department at Jones Myers Family Law

A call to allow grandparents to see their grandchildren following a change in family circumstances acknowledges the importance of their role in children’s lives – especially post-divorce.

MPs are urging the government to change the Children’s Act to include a child’s right to a close relationship with members of their extended family. The amendment would apply to other relatives including aunts and uncles, as well as grandparents.Often regarded as a vital, reliable source of stability, grandparents can provide much-needed emotional and practical support at a time of upheaval and uncertainty.

Their role, particularly in the early days of a divorce, can be instrumental in sustaining their grandchildren’s critical routines – as well as supporting their son or daughter both practically and emotionally.

The court considers factors including existing relationships with the children, any risks of disruption or harm to them – and the wishes and feelings of the child’s parents. It also takes into account if the child is being looked after by a local authority and the authority’s plans for their future.

In our experience, it can be difficult for grandparents to obtain leave unless the child or children involved had lived with their grandparents who were their primary carers.

While the number of successful leave applications is increasing, parents often reject or challenge applications made by grandparents., They claim the litigation would cause them stress, or that the grandparents applying do not have a relationship over and above the “normal” grandparents’ role, and therefore can successfully resist being considered under the current law.

There has been a history of considering the wider role of the family, and whether the court should have a role in managing these relationships which has resulted in the new laws being considered.

Under the new proposals, grandparents would not be required to make a “leave”/permission application which can be prolonged, stressful and financially prohibitive as there is no legal aid to assist grandparents to pursue child arrangement orders, or any plans for this to change.

The need for reform is also underpinned by the changing attitude in the legal system, recently reinforced by the EU’s top court ruling that grandparents have right of access to their grandchildren.

The psychological and emotional cost for grandparents and children who are deprived of a loving relationship can have a long-lasting impact which legislation will help to redress. After several failed attempts at reform, let’s hope that change is round the corner.

For more information about the divorce process or any aspect of family or children law, call Jones Myers at our Leeds office on 0113 246 0055, our Harrogate office on 01423 276104, visit www.jonesmyers.co.uk, email info@jonesmyers.co.uk or tweet us @helpwithdivorce