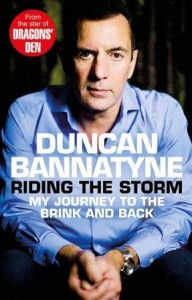 No amount of money can lessen the pain of divorce as demonstrated by revelations from Dragon’s Den star Duncan Bannatyne that his marriage break up pushed him to the brink of suicide.

Despite his millions, the entrepreneur says that the end of his marriage to second wife Joanne McCue crushed him emotionally and, as the divorce process continued, he turned to drink and became increasingly depressed.

Duncan Bannatyne bares his divorce trauma in his autobiography Riding the Storm out on September 26. The business angel, well known for his no nonsense style on the popular BBC 2 business show, reveals that he had to flee the television studio to “go and cry somewhere” after discovering his wife was divorcing him.

It was while filming the ninth series of Dragon’s Den that Joanne broke the news via a text message that she wanted a divorce. Duncan writes that “I couldn’t believe that after 18 years together she didn’t tell me in person”. He describes waiting for a train to London with “tears streaming down his face” and feeling that the only way he could “make the pain stop” would be to jump in front of a fast train.

In a society where it still perceived that ‘real men’ don’t show their emotions, I welcome Duncan Bannatyne’s candid admissions of his fragile state of mind at the time of his marriage break down. During my decades as a family lawyer I have witnessed both men and women from all walks of life and backgrounds who have been driven to the edge of despair when they marriages fall apart. In fact I have travelled across Yorkshire to meet clients in pubs and tearooms because they have felt isolated and depressed.

We are used to picking up business advice and best practice from Duncan Bannatyne’s TV appearances, however there are also lessons that all divorcing couples can learn from the Dragon’s Den star: